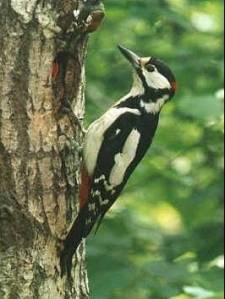 The great spotted woodpecker is a bird belonging to the order of Piciformi and the family of Picidi and its scientific name is Dendrocopos major.

It is widespread in Europe and Asia, absent in Ireland and in the far north of Scandinavia and Scotland. It lives wherever there are trees big enough to allow it to dig its nests.

Big and strong, the great spotted woodpecker, is perfectly adapted to continuously hammering on tree trunks in search of insects. Its main characteristic is the particular tongue that is placed in a tubular structure that runs along the lower jaw, above and behind the head and which extends up to 4 cm beyond the tip of the spout.

His colorful plumage on the body continues on the head. The male can be distinguished from the female because it has a red spot on its nape.

The wings are short, but broad and with rounded ends. The primary flight feathers are characterized by pronounced white stripes visible in flight.

The shoulders are covered with white feathers. The great spotted woodpecker has two toes pointing forward and two backwards. Robust and with well developed claws, they allow the woodpecker an easy handling on the bark of trees.